Marie McTeague (formally Clarke) hails from Letterkenny, Co Donegal. She began playing the piano accordion and tin whistle at the age of 5 and competed in the Fleadh Cheoil over the years, winning the Senior All Ireland Title in 1997 for the Piano Accordion. Marie studied Music and Irish at UCC and furthered her studies there with a H.Dip in Education. In 2002 she graduated from the University of Limerick with a Performance MA in Traditional Irish Music. She also holds the TTCT diploma in teaching Traditional Music from Comhaltas Ceoltóirí Éireann.

Marie was part of ‘The Rising Step’ Dance and Music show, which ran successfully in An Grianan Theatre in 2008 and 2009. She has played at many musical events in Ireland and abroad including Milwaukee Irish Fest, Shetland Island Accordion & Fiddle Festival, and Eurofest in Greece and Italy. She played and recorded with several artists and groups over the years including Fiddlesticks, Eamon Friel, Arcanadh, and Ceoltóirí an Aonaigh. Marie is currently based in Letterkenny and teaches music in the local Secondary School, Coláiste Ailigh. 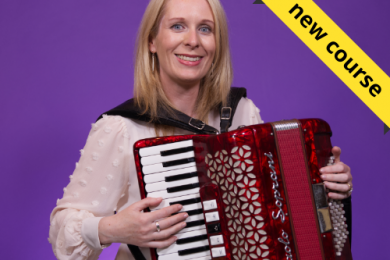